The official death toll of Hurricane Dorian in the Bahamas has risen to 20 people with officials certain the number will continue to rise, the prime minister, Hubert Minnis, announced as he declared a “historic tragedy” on the archipelago.

At a press conference late on Wednesday the prime minister also warned of reports of looting on the Abaco Islands, a northern band of islands in the Bahamas hardest hit by Dorian, which pummelled the area as a slow moving category 5 hurricane over the weekend. 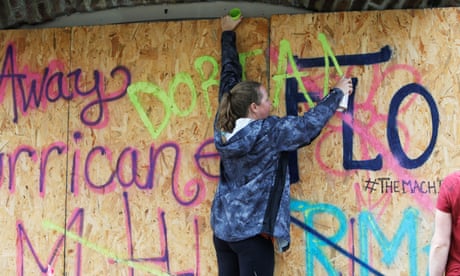 Minnis, who had recently returned from a flyover of the Abacos, warned of “generational devastation” in the northern region of the Bahamas that also includes Grand Bahama, the archipelago’s northernmost island.

As Minnis confirmed the number of dead he cautioned: “we expect that this number will increase”.

“We ask you to pray for the families and loved ones deceased,” the prime minister added.

Large parts of the Abaco Islands have remained inaccessible to rescue crews, who continue to prioritize emergency evacuations, meaning the full scale of devastation caused by the hurricane is still not completely clear.

Mark Lowcock, the United Nations under-secretary-general for humanitarian affairs and emergency relief coordinator, told the Guardian that the agency estimates around 70,000 people in the northern Bahamas remain in need of relief assistance.

At the island’s main rescue centre in Nassau, the Bahamas capital city, US Coast Guard and Royal Marines helicopters arrived sporadically throughout the day bringing in dozens of rescued people from the Abacos Islands.

Rescue workers said that the challenge remained gargantuan due to the level of destruction and how remote the northern islands were. With no functioning water systems in accessible areas, workers had not been able to establish a permanent rescue site on the Abacos.

The US Coast Guard had rescued 114 people by Wednesday afternoon. A spokesman told the Guardian that six helicopter rescue crews had rescued around 60 critically injured people by Tuesday evening.

Lt Keith Webb, a Royal Marines helicopter co-pilot, said that his crew had rescued a seven-week-old baby girl who suffered from acute sepsis in the aftermath of Dorian. The crew had also rescued two children, aged six and seven, suffering from hypothermia.

Other recently evacuated Bahamians said they had endured days without food and, in one case, had witnessed a neighbour die in front of them from cardiac arrest.

Minnis said he had spoken to Donald Trump earlier in the day. The US president has suggested he may visit the Bahamas in the wake of Dorian.

“I guess you would call it a British protectorate, but I will do a lot,” Trump told reporters earlier on Wednesday. “We’re waiting for a call – they’re having a lot of trouble with the telephones over there as you can imagine – from the prime minister and we’re helping a lot.”

Dorian’s ferocity has weakened since it struck the Bahamas, but it remains powerful as it creeps up the south-eastern US coast toward North and South Carolina on Wednesday.

Forecasters warned of near-record water levels and millions of people are under evacuation orders. Businesses are boarded up around the city and some people have been in shelters for days. South Carolina’s governor Henry McMaster warned residents in evacuation zones to “get out now”. There was still time for people to leave at-risk areas, he said, but they should do so immediately.