‘We have to give paradise a hand’: Dorian aid operation proves a huge logistical challenge

A highly complex aid operation is under way in the Bahamas in the aftermath of Hurricane Dorian, with an array of international non-goverment organisations rubbing shoulders and occasionally treading on each other’s toes.

On Wednesday morning, when a vehicle drove up with medical supplies for an outpatient centre in Treasure Cay in the devastated Abaco Islands, a volunteer for Heart to Heart International politely advised: “We already have enough of everything – more than we can use.” 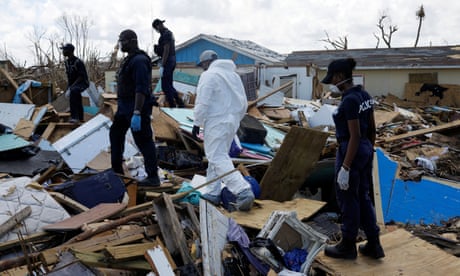 That afternoon, when a hundred tetanus vaccinations turned up at the Cooper’s Town community clinic, a health worker said: “We appreciate it but there’s no place we can store these.” He also noted: “We’ve only used one tetanus shot in four days.”

Since Dorian, a massive category 5 storm and one of the most powerful on record in the Caribbean, slammed into the Bahamas more than a week ago, the aid effort has been unusually complicated.

The sprawling set of islands provides logistical challenges, but proximity to the US has enabled philanthropists to send over private planes full of supplies. These are welcome, but hard to monitor and can lead to over-supply, prompting grumbles about lack of coordination.

There are also fewer entry restrictions than usual on individuals and organizations that want to help, leading to fears of a free-for-all. The Bahamas’ National Emergency Management Agency has acknowledged the frustrations. “This is a massive operation with many moving parts,” it noted.

Paul Taylor, operations response manager of Team Rubicon UK, an NGO drawn mostly from ex-military personnel that is helping partners distribute aid, said: “It’s not going to be easy and I think a lot of that is geography. You’ve got these two main islands that have been affected and lots of keys and off-lying islands where you need to get out to.

“Often in these disasters you’ll have one point of entry that’s very easy to control: all the aid comes into this airport and that’s where everything is coordinated from. Here, every single day you’ve got private donations, people flying in from the US mainland and from other Caribbean islands and offloading aid, which is great, but how do you then coordinate that? I think that’s the issue.”

Aid work is often an unglamorous case of blocking and tackling. Stacks of bottled water, baby wipes, batteries, medicines, nappies, power generators, snacks, tarpaulins, tools and cat and dog food must be offloaded from planes to trucks and dispersed.

On Wednesday, Team Rubicon UK delivered portable power generators with fuel to two churches. Charles Ilfrenord, pastor at the pink-walled New Haitian Mission Baptist church, said it would offer relief to the 45 Haitians, including two children, still camped there more than a week after being left homeless.

“We need help,” said Ilfrenord, whose church is now crowded with cardboard boxes, fans, plastic chairs and suitcases under a woodbeam roof. “People come to the church to be safe. And now we have power.”

Some involved in the international aid effort acknowledge the daunting nature of managing a vast operation.

Brian Wilson, team leader for Humanity First, said: “You’re got a lot of really well-intentioned people, both nationally and internationally, coming here and it makes it really difficult to coordinate that volume of help.”

But others express concern about a lack of direction. Dwayne Strawn, an emergency responder trainer from the British Virgin Islands, said: “There’s a lot more that can be done, that should have been done, that should still be done. I’m not quite sure what didn’t connect. Based on the fact we had a similar disaster in the British Virgin Islands and Puerto Rico two years ago, and in the recent past we’ve had a bunch of hurricanes, I think our response should have been a little bit more coordinated and forthcoming.”

The official government death toll has risen to 50, but few aid workers on the ground believe that is anywhere close to reality.

Strawn said: “Based on the reports we have heard from people on the ground, it’s going to be way, way more than what the government is reporting. We are ready for closer to thousands.”

Asked why the government figure is still so low, Strawn added: “Maybe they’re getting the wrong information. I heard somebody said that they don’t want to send the wrong message in terms of tourism; nobody wants to come to a disaster. But I think the sooner we come to terms with what’s happening here, the sooner we’re going to clean it up and get people back here. It’s paradise and we just have to give paradise a hand.”