The Vanuatu island in the eye of the storm

Pentecost Island, devastated by Cyclone Harold in April, has been left a silent shadow of its former self. But its people endure

Touching down on the island of Pentecost in Vanuatu, it takes hours to notice the silence. After a while it hits you: there’s no birdsong, no insects buzzing and chittering. There is no wind in the trees.

You don’t register the silence at first because your eyes are overwhelmed with the magnitude of the destruction. The eye of category 5 Cyclone Harold passed directly over the central and southern half of this remote and mountainous island on April 5.

The destruction was comprehensive and catastrophic.

Residents of Vanuatu are used to disaster. The Pacific nation is ranked by the UN as the country most at risk for natural hazards. Earthquakes, volcanoes, cyclones, we’ve seen them all.

Both east and west coasts of the island were devastated.

Most homes were damaged or destroyed. Gardens were despoiled. About 12,000 people are living in makeshift conditions and there’s no sign that’s going to change soon. 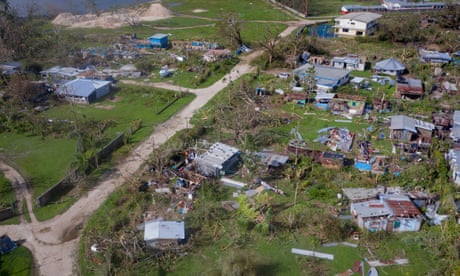 I’ve been coming to Pentecost since 2006. My wife and our two children are from the island. Every visit is a welcome opportunity to re-immerse ourselves in kastom and culture thousands of years old. But even without the cyclone, this visit is a sombre one.

My family and I are here because my father-in-law Apu Cyril is dying.

He has been unwell for years, fighting a degenerative heart condition. On the day of the storm, he slipped and fell on the water flooding into the house, dislocating his hip.

The island is unrecognisable. Mountains are shorn. The trees that do remain are dying – their limbs and trunks blasted by unimaginable forces. The ground littered by mounds of fallen coconuts.

We’ve witnessed scenes like this before. I remember Tanna in 2015, goggling at a cathedral-like banyan tree that had been reduced to matchsticks.

But that was one swathe cut through an island, a rogue gust that levelled an area hundreds of metres wide and nearly a kilometre long.

This is half an island.

Nearly 250sq km of land, inhabited by more than 12,000 people. One family member told me everyone in his village experienced a week-long fugue after the storm.

Overnight, their island was taken away, and replaced with broken shards. Mere realisation of the extent of the destruction took days.

The eye of the storm

Nowhere is the damage greater than in Melsisi.

The former Catholic mission is – or was – the economic and religious hub for the entire central area. Thousands would come from nearby villages, navigating the precipitous slopes on foot to trade or pray at what was the largest church of any kind in the country.

Melsisi nestles in a gently curving valley. When the winds came, they were focused and intensified by the hills. They scoured the town. There’s barely a house left standing.

Even a month after the storm, debris lies everywhere. The only clear space is a one-lane cement strip snaking its way through the town and up the looming mountain behind.

The operations centre is located in the old police station. The roof is partially blown off, and the windows on the windward side are all blown in. Dozens of aid workers, police, and paramilitary shuffle through. Most are sleeping rough on cement floors.

The toilets are flooded and rank. Food is dished out 24/7 by a friendly crew from a field kitchen rigged up on a landing. The operations room has a single desk and computer.

Nobody has proper shelter, neither responders nor villagers. Overcrowding, sanitation and hygiene are a joke, and it shows. Diarrhoea is endemic, people have fevers, coughs and headache.

What should be a hive of activity feels instead like a fly-blown village at siesta. People wander about in twos or threes. Patients sit listlessly on benches outside the clinic. Occasionally a transport driver will rev his way up the cement and grab a few litres of diesel from a hand pump attached to the fuel drum.

The relief effort is barely a band-aid on the island’s gaping wounds. A road crew despatched from Port Vila did stand-out work in the early days, clearing roads that had literally disappeared under the debris. Now, though, they’re operating a single digger. It plods its way south, poking at river crossings and backfilling muddy stretches.

There has been one food drop in a month. Standard operating procedures developed in the wake of 2015’s cyclone Pam are ignored. Every household is given one bag of rice, one carton of tinned fish, and one carton of bottled water. Displaced families are denied if their names aren’t on the list.

Our house, one of the few left intact, has 20 children staying in it from four families. The rice lasts a day and half, the water barely a day.

Taro, the staple here, is dead in the ground. Villagers ate it until it became rank. Now, without supplies, they will suffer.

Our family is fortunate. We’ve shipped hundreds of kilos of rice and flour and other essentials from the capital, and will be making regular shipments for months. Many other families have similar networks in place.

Nobody will starve. Not outright. But they won’t eat well, or very much. Even before the storm, island children were shorter and weighed less than their urban counterparts.

It’s hard to say for how long livelihoods will suffer. Copra – dried coconut meat – has been an economic mainstay for decades. Now, coconut plantations have been annihilated. Seeing the destruction across Santo and Pentecost, and talking with the relief workers, and with those who live here and depend on these crops, its estimated the storm destroyed half of all the productive trees wherever it struck.

But here on Pentecost the number is much higher, closer to 70%.

Some communities have lost literally every tree they had. They will take decades to regrow.

In recent years, kava has become the main source of affluence. Many crops are dead in the ground, and it will take four years for any new plantings to mature.

On the weekend, we ride along with a family member on a buying run into “middle bush”. At one village, family members aged four to 70 turned out with bags of dried kava ready for weighing. Children pay for their own school fees, clothes and a lolly or two with the proceeds.

The matriarch sits in the weighing room with a sheaf of bills representing her entire family’s income from this sale, wearing a look of preoccupied concern. It’s not clear when their next payday will be.

Losses to the current crop will take years to recoup.

The island we know is gone

A joint Columbia/Stanford study of more than 6,700 cyclones found that when disasters strike, their effects remain for decades. People experiencing the 90th percentile of a cyclone’s effects will see -7.4% impact on wealth 20 years after the storm has passed. For the people here on Pentecost, who have seen closer to the 99th, the impact could be nearly -15%.

The Pentecost we know is gone. It may never entirely return. Children will grow up with no memory of its original lushness, its brooding cloud-draped slopes. Their parents will have less to give them. They are certain to lose a year of education, but it could be much more. The government of Vanuatu only replaced the last classroom destroyed by 2015’s cyclone Pam this year.

People still laugh. Children still gleefully clamber amid the wreckage. The sniping and stories and sexual intrigue continues as they always have. The people endure.

Even Apu Cyril has taken a turn for the better. A kastom medicine man has come to give him lif, a herbal medical cure. And for the first time since the storm, Cyril is able to sit up. He cries for joy.

My wife and mother-in-law make gateaux for the children of the village, who buy them for 20 vatu each (about AU$0.25).

These simple pan-fried doughnuts are a hit, and the first batch sells out immediately. For the rest of the week, the sizzle of dough landing in oil is added to the morning chorus.

A shadow of its former self, Pentecost endures.